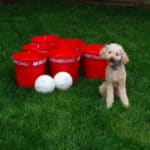 First things first, this is the song I'm listening to as I write this product review. Lil' Wayne gets me AMPED! I suggest you listen to this at high volume in a residential area while reading this review. Now on to the BEARPONG review... Nathan and I had a professor years ago at UF that always told us that if you're going to do anything, swing for the fences and do … END_OF_DOCUMENT_TOKEN_TO_BE_REPLACED

A while back we posted an article on the official rules of Beer Pong. Overall the response was good. However, we kept getting comments and emails from individuals who claimed the proper name for Beer Pong was Beirut. Here is one such comment: "I really wish the legit drinking websites would stop calling it “Beer Pong”. It’s Beirut, dammit. For those of us that play Beer Pong, … END_OF_DOCUMENT_TOKEN_TO_BE_REPLACED