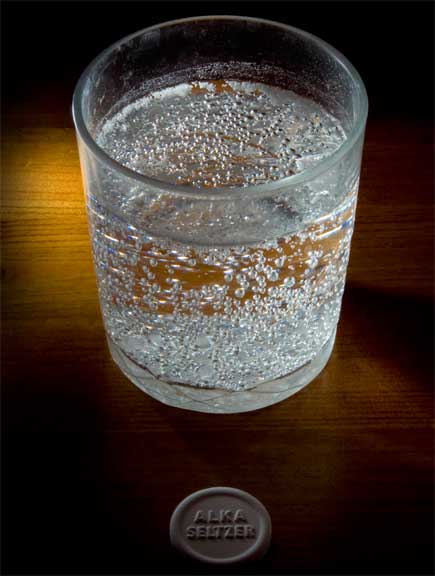 Hangovers are proof that God has a sense of humor. A very sick and twisted sense of humor. Hopefully on my judgment day when St. Peter or whoever is showing me all the bad things I’ve done, he’ll give me credit for all the epic hangovers I’ve endured.

When I was younger I used to view hangovers as punishment, hence the reason that I used to make bargains with the Almighty that if he would just make me feel better I would never drink again. If I had a dollar for every time I tried that route I could probably put a stripper through at least one semester of college.

As I got older and wiser I knew that after a hard night of drinking that began with a bottle Jack Daniels and ended with Jose Cuervo, I would be met not with punishment, but rather a challenge. I knew I was going to feel like a big bag of shit. The only question was for how long and how big of a bag. How do I get rid of the infamous hangover?

Over the years I’ve tried just about every technique, snake oil and just plain retarded idea you can imagine to not only get rid of, but prevent a hangover. So today I’ve decided to share some of the best and worst hangover remedies I’ve come across through the years. Read that last sentence again very carefully. I’m only going to talk about hangover remedies that I have personally tried. I know some ass hat is going to come up with some crazy shit in the comments section like “You didn’t talk about drinking the pee of a lactating Alpaca while sticking a carrot up your ass.” I know I didn’t. Because I’ve never tried that. I don’t have any carrots. Or “The only thing that gets rid of a hangover is time.” Yes, this is true. But letting something run its course isn’t curing it. How about next time you get cancer you just give it some time. Tell me how that works out.

So lets get on with the show.

What is a hangover? Put simply it is you being really dehydrated. It takes tons of water to filter alcohol out of your body after a night of drinking Boone’s Farm from the bottle. So the best hangover cures are the ones that hydrate your body as quickly as possible. I’m not going to include water in this list because any dumbass knows you should drink as much water as possible when your sick in any way.

I’ve said it before and I’ll say it again. An ounce of prevention is worth a pound of cure. That being said this is probably the best hangover cure I know of and is my current go-to move. If you know you’re going to make like a nail tonight and get hammered, be sure to swing by the store and pick up a 64 oz. lemon-lime Gatorade before hand. The trick is to drink the entire bottle before you go to bed. Don’t put it into the fridge either. It’s impossible to drink 64 ounces of 40 degree Gatorade in one sitting. Instead just leave it on the counter, or better yet on your pillow so you don’t stumble into your room and forget to drink it. The high-fructose corn syrup used to sweeten the Gatorade also counteracts the chemical in your brain that tells you your full and will allow you to drink the entire bottle. And why lemon-lime Gatorade? Because if you’re a puker it won’t stain anything.

This is another prevention one. If you didn’t have enough sense to eat before you went out drinking you should definitely eat before you pass out. No food in the belly means low blood sugar when you wake up that in turn means you go from bad hangover to really bad hangover. And lets face it, it’s much better to have something to throw up rather than dry heave until your asshole hurts. And why the Waffle House? The waffle house is kind of like Las Vegas. They welcome a drunk who has no concept of money or sticking to a budget. I’ve personally dropped more than $50 for food I didn’t eat on more than one occasion.

This one is in case you didn’t follow the Waffle House advice. As mentioned before, low blood sugar will magnify a hangover. Genereal Tso’s is like jet fuel to your body. The pork fried rice has enough carbs to kill a horse on Adkins. The chicken itself has tons of protein and sugar which will make you feel like a million bucks. (I have no scientific reason for this. It just does.) And talk about energy! At 1700 calories, the average General Tso’s combo has enough calories to last your anorexic girlfriend a week

If you played your cards right last night, there’s a good chance there’s something sleeping next to you that resembles a girl, and she most likely feels like she was run over by the same truck that you were. What you both need is a good ol’ shot of endorphins. The temporary high produced by the endorphins released during sex will be the pick me up you need to get your ass out of bed. Just make sure you wake her up first.

I can handle the headache. It’s the nausea that kills me with a hangover. In case you don’t know it, Cannabis is prescribed to cancer patients in some states as a cure for nausea. Now I know that if you’re the type of drinker you say you are, chances are you have a friend who’s a pot head. Snag a doobie from him and stick it in a safe place (freezer) for the next time you have one of those nausea hangovers. You can wake up, take a few hits, and then eat your General Tso’s. Be warned: Don’t get too high. Being high and hungover is not fun.

Hair of the dog

This is probably the most well known cure. It’s also the dumbest unless you don’t have anything productive to do the rest of the day. I mean seriously, if you wake up and start drinking again you’re just adding fuel to the fire. Sure you’ll feel better because you’re drunk again. As soon as you stop drinking you’re back to square one again. So avoid this tactic unless you plan on drinking and watching football all day anyway.

The pick me up concoction

I learned this one working the Sunday brunch shift at Applebee’s, so listen up food servers and bartenders. take a coffee cup and fill half full with coffee. Add about 5 packets of sugar and stir. As soon as you’re done stirring go to the soda fountain and fill the cup the rest of the way with coke. You have to drink the entire thing immediately or it will foam all over the place. One of these every hour or so will help you get through the shift without slapping the shit out of the lady who keeps asking for condiments one by one

Go to the gym

Ok. You’re hungover. Why? Because your body is full of toxins. It’s time to evict those dirty little bastards. Make your way to the gym and find an open treadmill. Pick a moderate pace and you’ll start sweating almost instantly. 20 minutes should have you feeling like a champ. Oh, DO NOT FORGET TO BRING A WATER BOTTLE AND DRINK IT WHILE YOU RUN. As funny as it would look, you don’t want to pass out from dehydration on a treadmill.

So there you have it. The 8 best hangover cures I know of. If you know of any good ones I should try then by all means outline them in the comments section. I’ll do my best to try each one and review it in a “user submitted hangover cures” post.