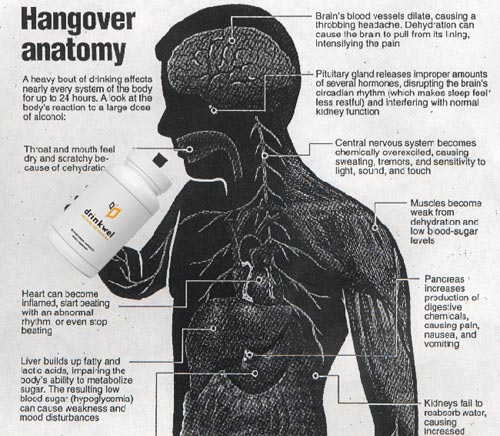 Since the very beginning, The Drunk Pirate has been dedicated to the drinking lifestyle.

Beer, liquor, malt beverages, drinking games—pretty much anything that gets you crunk. But there’s always been a not so glamorous side to the drinking lifestyle. It’s a side we’ve all encountered but love to forget. We call them hangovers, and they’re a fact of life. Like your ex-girlfriend getting knocked up by some toolbag after you break up, it’s not a matter of if it’s going to happen, it’s a matter of damage control.

For this reason, we’ve come to accept hangovers, much like we’ve come to accept little Toolbag Jr. when we inevitably get back together with the ex-girlfriend. Sure we all develop our own little rituals to deal with hangovers. We’ve even covered some of our favorites in a previous hangover posts. But that doesn’t mean we have to stop searching for something better.

Enter drinkwel, the multivitamin for healthy people that drink.

The concept seemed simple enough. A specially formulated alcohol nutrition supplement that provides short-term relief and long-term support against the negative effects of alcohol. Bold words for what sounds like a hyped up multi-vitamin. But with a money-back, feel healthier guarantee, it was worth a shot.

The instructions said to take 3 capsules daily with food and water, and to take 3 additional capsules with water before bed if drinking. This seemed like a hell of a lot of capsules to me, so I bent the rules a bit. On Monday, after a particularly long day in the office, I started my routine of 2 capsules a day to get prepared for the weekend. By Friday, it appeared the placebo effect was in full swing as I had convinced myself that I had more energy than usual. It was time for a reality check and to see what this drinkwel stuff was all about. I had to be up early on Saturday to meet a friend for some kayaking. So that Friday I drank myself under the table and skipped my usual 4th meal in favor of three drinkwel capsules and a lemon-lime Gatorade. Six hours later, I was kicked back in a bright yellow two-seater kayak drinking a Four Loko, feeling like a champ. By all accounts it appeared drinkwel had done its job.

But even a blind squirrel finds a nut every once and a while. To really push it to the limit, I made sure to hit all my favorite drinking holes that night for a second round of testing. The next morning, after a full night’s rest I was still feeling like a champ. Now I don’t know if a couple days of heavy drinking are enough to hand over the hangover cure title to drinkwel, but with each passing hangover-free weekend, it’s getting harder to deny the apparent health effects of drinkwel when applied to the drinking lifestyle.